Environmentalists have renewed their calls for Hongkongers to reduce their household waste in the wake of an unprecedented amount of rubbish that has washed up on the city’s beaches in recent weeks.

Residents produce more waste per capita than any other city in Asia and were responsible for 3.5 million tonnes in 2014, according to the latest government figures.

Officials have blamed the unusually high levels of rubbish recently polluting the city’s beaches on mainland cities, suggesting waste has been carried down the Pearl River following heavy rain and flooding.

Cleaners and volunteers collected 78,000kg of marine refuse along Hong Kong’s coastline during the first week of July.

But environmental activists insist a large proportion of the waste is being created by the city’s own residents.

Hong Kong’s huge ecological deficit – the difference between its resources and its capacity to generate them – means that if everyone in the world consumed at the same rate as Hongkongers, they would need three planet earths to sustain them, according to a previous study by the World Wildlife Fund.

Dr Jeffrey Hung from Friends of the Earth Hong Kong said the current rate of consumption was “highly unsustainable”.

He called on residents to seriously reflect on how they consume goods, as well as taking practical steps to save their city.

“Hong Kong citizens generate more waste per capita than other similar, neighbouring cities like Seoul and Taipei,” he said. “Not only does this look bad for us, our landfills are also running out of space based on Environment Protection Department estimates. Finding a way to separate consumerism from economy or ensuring consumerism doesn’t result in ecological damage is key to the problem.” 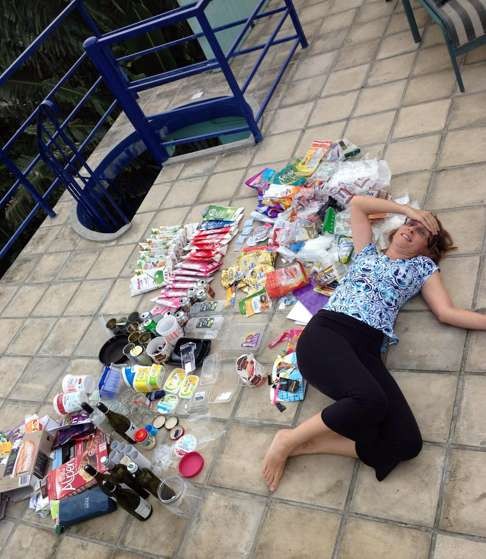 “Hong Kong is currently extremely extravagant with its resource and energy use,” he said. “It is an obsolete and dangerous ‘business as usual’ model which, after the Paris climate agreement, has to immediately cease.”

Extra beach clean-ups have been organised over the last fortnight in a desperate bid to prevent Hong Kong’s coastline from being overwhelmed with marine waste.

Angie Bucu, an event organiser for Lantau-based eco-group DB Green, which has led clean-up operations on the island, said Hong Kong was at a “turning point” in terms of its approach to the environment.

“We need to get people within the community thinking about what they can do,” she said. “It is young people particularly who can make the change, as adults won’t necessarily make the change.

“So many people are unaware of the health risks to themselves and the environment.”

Some Hongkongers have been noting down their efforts to reduce household waste as part of a Plastic Footprint Challenge on Facebook. The initiative coincides with Plastic Free July – a worldwide initiative to cut down the amount of plastic waste by encouraging participants to refuse single-use plastic for an entire month.

She was surprised by the amount of waste her family created despite being more eco-conscious than most residents.

“It has been a really educational exercise, which I would recommend everyone to try,” she said. “The big takeaway for me is the extent to which my family’s normal lifestyle is contributing to a global waste problem. Seeing my waste laid out was no different to seeing the trash laid out on the beaches that I have been cleaning up for the last six years.”